The Man On The Orange Wall A photo of Sri Ramana Maharshi on the famous Orange Wall

A story from Eddie:

The guy in the photo, Ramana Maharshi, was an Indian sage who died in 1950. A guy without skeletons in his closet.  A guy, as far as I can tell, without a closet.

It’s an iconic image in the yoga world, and there’s a built-in problem with iconic images in that you don’t think you have to do any more work, you just hang up an image and you think the image will do the job, that the job is done.

Orange, from the spiritual perspective, is the color of renunciation. It’s saying, if I take a good clean look at my life there’s probably a few things I believe I need, around which I’ve built an identity, that actually I don’t need but I’ve grown awfully fond of (and can’t, um, let go of).

Hanging onto them is what hurts, not losing them.

Loss is the natural way, things come in and then leave, that’s how it’s always been.

Orange represents a deeper inner commitment to something beyond like and dislike, having and not having … following the “orange brick road” suggests a path that no one but you can walk.

The color won’t do the work for you, but it can remind you of the work that needs doing.

I love the story of the person who took to wearing the orange robes of renunciation but wore them proudly, just as he had his fancy suits.

You can hide behind a color, a belief, an image, a PR campaign. Yoga is about exposing pockets of hiding, areas of denial. Tensions and beliefs and grievances we don’t even know we’re harboring create an unnatural body we’re then challenged to navigate.

When I was first introduced to Ramana’s basic message: “you’re not who you think you are”  I frankly had no idea what he was talking about, and at the same time knew it was inarguably correct.

Of course most of Ramana’s teachings were offered in silence. As a teacher, I yak yak away in class, play music and am not a renunciant by any stretch …. but you have to start somewhere.

The color, the photo …. are aspirational … reminders, guideposts …. there is a way of life that’s different from the one I’ve grown accustomed to and protective of.

The book table at the studio is filled with books about race, caste, division, inequality.

When asked how to treat others, Ramana said, “There are no others.”

How do you get to where he is, how do you see through eyes that see no division, only unity and perfection?

Same way you get to Carnegie Hall.

Awhile back, after 15 years, my commitment to Yoga Soup wavered. I was exhausted. Too many, you know, things to keep track of.

I allowed someone to come in with the promise of investment. In return I let them re-create the studio. First thing they did, they painted the orange wall gray. Took down Ramana’s photo. Went through the studio in similar gray-wash fashion. I watched. Watched my confusion.

The promised investment never materialized. I had to make a choice of whether I could step back in feeling empty, exhausted and not sure of what I had left to offer.

There’s a photo of another guy on the wall at Yoga Soup, a guy named Thomas Merton. Trappist monk, big closet, lots of skeletons.

He said, “prayer and love are learned in the hour when prayer becomes impossible and the heart has turned to stone.”

We repainted the wall. Put back the photo.

And here’s what I did differently: I went all in. I believed I was all in before. I would have sworn I was. But I wasn’t. I was holding something back. Something that no one could see but I could feel.

Once I let go of me, I was all in, all the way, and things really changed at Yoga Soup. That’s an awkward description, but that’s what happened. That’s why Ramana tried not to use words that much.

The effort of me falls away. Like unclenching a muscle I didn’t realize was clenched.

To know something with wisdom is to let it go, to have no suffering over it.

Impermanence is the one law not subject to change. It’s just the way the world is.

That’s the world seen from Ramana’s eyes, that’s what makes an image radiant, iconic — the awakening behind the eyes. 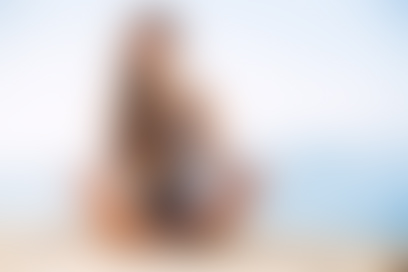 Neil Gaiman, The Ocean at the End of the Lane One of the truest works…

I was born at  Findhorn in Scotland. From as long as I can remember, I…

The Music We Love

Here's how it works at Yoga Soup, in our lives full of ordinary miracles. A…